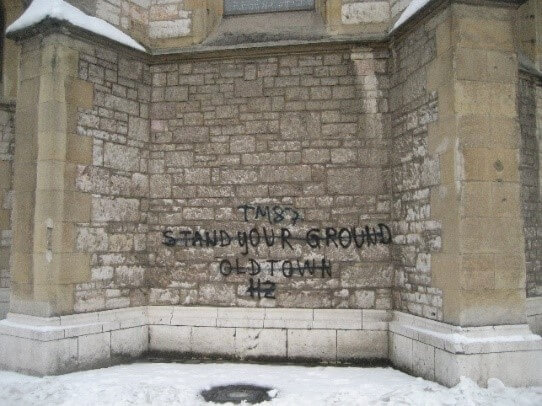 After the Soviet Union collapsed in 1989, National rivalries among Croats, Serbs and Bosniaks within the former Yugoslavia lead to the Balkan Wars. From 1992 to 1995 Bosnia & Herzegovina was torn apart by conflict, ethnic cleansing, and in Srebrenica, the genocide of Muslim men and boys.  Its capital, Sarajevo suffered the longest running siege in modern times – nearly 1000 days.  The Dayton Accords in 1995 imposed a fragile ceasefire across Bosnia based on geographic divisions and overlapping ethic governments to prevent future conflict.  Refugees from the Balkans – mainly widows and orphans – were scattered across the country.

Our pre-trip research and first days in Bosnia centered on working with Catholic Relief Services to evaluate the role of business in peace building in post-conflict communities.  While walking around Sarajevo, we could not miss the Sarajevo Roses.  While the Serbs placed Sarajevo under siege, their mortar shells damaged streets and sidewalks.  Rather than repaving the roads, Sarajevo residents filled in the holes with red resin, and in such a way, commemorated every spot where the war scarred the city and took lives.

After our fourth day in country, the team decided not to merely study the need for business development, but to address it.  This meeting changed our scope of work from academic inquiry to making an attempt to harness the dynamism of business to rebuild Bosnia, leveraging our business education to make this happen along the way.

The unemployment rate in Bosnia after the war was incredibly high, despite the fact that Bosniaks were relatively well educated.  Moreover, they could obtain no visas to work in the rest of Europe.  And thus, since we could not bring the Bosniaks to the jobs, we need to think through ways to bring jobs to the Bosniaks.  Through our interviews, many Bosniaks showed an instinct for possible business ventures, yet under the former Yugoslav education system, their training focused more on engineering, medicine, architecture, science.  There was no business school in Bosnia to educate future business entrepreneurs on accounting, finance, marketing, operations.  To address this need, our team worked with Catholic Relief Services to develop a business incubator concept on the ground floors of the low cost, social housing it was building for returning refugees.  Ultimately the recommendations centered around an exchange to match foreign direct investment with start-up owners, mentors to help entrepreneurs navigate red tape and advice on general business problems, and basic courses on accounting, marketing, supply chain, and business ethics.

Since the incubator in Sarajevo opened on the ground floor of the low-cost social housing in 2010, it has grown to offer entrepreneurs ten store fronts.  Once a business is profitable the owner has to start paying rent, and when the company grows more it has to move out and launch, freeing space for the next entrepreneur.  Since 2010 hundreds of people have at some point been employed in this space.  And in 2013 a major manufacturer opened a factory across the street from the incubator which has provided even more opportunities for employment.