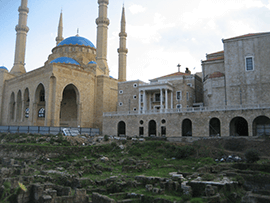 Lebanon's religious divisions and fragile political system are extremely complicated, with rivalries among sects lasting for generations and remaining a factor today. Lebanon has by far the largest proportion of Christians of any Middle Eastern country, but both Christians and Muslims are sub-divided into many splinter denominations. Population statistics are highly controversial. The various sects – particularly Sunni, Shia, Maronite Christians, Greek Orthodox, and Druz - all have vested interests in inflating their own numbers for political ends.  One of the rare things that most Lebanese religious leaders will agree on is to avoid a new general census, for fear that it could trigger a new round of denominational conflict. The last official census was in 1932.

The faith-based international humanitarian organization that was BOTFL’s partner has worked in Lebanon for decades on social, educational, and health programs than may begin to bridge sectarian divides.  The question for the BOTFL team was whether it may be possible to examine whether pilot programs around economic development and business may also begin to foster collaboration, or at minimum greater interaction, across Lebanon’s sects.

The BOTFL team worked closes with its NGO hosts in Beirut to map out a series of interviews and meetings across the many cleavages in Lebanese society.  Through this partnership, the BOTFL team was able to meet and interview a variety of key business and civil leaders including: entrepreneurs, Members of Parliament, religious leaders, academics, journalists, staff at other NGOs, business leaders, and many other thoughtful observers of the challenges posed by the sect system to the overall economy in Lebanon.  By gaining an exposure to such a variety of people, the team was able to recognize themes and generated a variety of options to explore further.

Traveling far and wide across Lebanon, the team heard many sectarian leaders promise improvements to the lives of the people they were called to serve.  Yet the reality on the ground was far different, as many communities faced even the challenge of providing the most basic needs to their families –water, electricity.  Further, as business people, the team recognized where particularly industries and infrastructure improvements fundamentally rest on economies of scale, far beyond the scale of one sectarian community.  For example, one observation was that sectarian divides prevented even villages and towns from communicating with each other on basic infrastructure needs.   The team suspected that if villages cooperated, some of the big problems they faced could be lessened through the sharing of resources photo by Viva Bartkus

With the input of our local NGO partner, the BOTFL team settled on further examination of the electricity sector.  Many communities suffered rolling brown outs and black outs.  The few hours a day of electricity severely restricted the manufacturing and other industrial activity in any particular area.

The challenge then became how to teach the leaders of different sects that their community members would be better off collectively if they collaborated even on things as simple as investing in power generators.  As a consequence, the BOTFL team built an economic simulation training tool that used game theory to show the win-win scenario that resulted from neighboring villages on collaborating in investments in power.  The simulation showed how villages could increase the amount of electricity available to them by sharing a larger, more efficient generator instead of the many generators they were using.  The solution would increase the access businesses have to power—a major pain point for the communities they visited.  The training tool was meant to be used in half day meetings with leaders of multiple sects, so that they could come to the realization themselves that cooperation would improve the lives of all participating.

The game theory model could be utilized to show how possible collaborations across sects could lead to improvements in education, health, and access to electricity.  The team’s ultimate recommendation outlined opportunities for the faith-based partner to employ the educational tool to foster interaction across villages which could lead to significant increases in economic efficiencies, and hopefully in the long run, foster more trust and even fellowship.

From a personal growth perspective, multiple students have commented how the experience of working on BOTFL team Lebanon, ‘BOTFL knocks the cockiness out of you.”  “As MBA students, we are trained to believe that we can solve any problem and add value wherever there are inefficiencies—BOTFL is a course that takes learning from the hypothetical standard to a real world environment where, rarely, are there objective answers.” - Xavier Navarro, ND MBA 2010.

Although the BOTFL report and economic simulator training tool were well received by the staff of our local NGO partner, unexpected political events across the Middle East prevented their implementation.  Not long after the team left Lebanon, the Lebanese government collapsed.  The following year, the Arab Spring erupted across the region.  The international staff members of the NGO were subsequently evacuated from Lebanon.