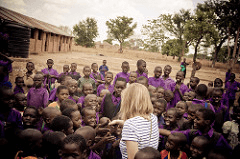 Between 1986 and 2006, Northern Uganda became home to thousands of people fleeing fighting between the rebel group, the Lord's Resistance Army (LRA), and Ugandan troops.  According to the UN's refugee agency, the UNHCR, more than 1.8 million internally displaced people (IDPs) were moved into 251 camps and "protected villages" during Uganda's so-called forgotten war, reinforcing Northern Uganda's geographical and political marginalisation from Kampala, the capital, in the south.  In 2007, Uganda and the UNHCR launched the process of resettlement began, to begin to return internal refugees back to their home villages.

This BOTFL III team originally planned to serve a development organization partner in Lebanon.  However, few weeks prior to departure, the Lebanese government collapsed, leaving the political situation in disarray; the team refocused its service to returning displaced people in Northern Uganda. One major challenges faced by returning refugees after many years was water and sanitation.  Local NGOs has helped villages organize community water funds to ensure adequate safe drinking water.  Nevertheless, the funds were clearly not meeting the need.

The team, upon arrival, began visiting various villages to diagnose the water challenges. They arrived at multiple villages and, when asked to see the water source, were led to a shallow, muddy pool often miles from the village, despite boreholes and wells existing within the village.  Many wells even displayed placards with the NGO or aid organization which had donated the well. The wells, almost universally, were no longer functional, partly due to decay of the equipment from lack of ongoing maintenance.  In village after village, expertise in well repair and funds for well maintenance were lacking among returning refugees; for the previous decade, UNHCR technical staff had provided clean water to refugees in camps.  What had initially seemed a tragedy of the commons, with no one taking responsibility to maintain the wells, quickly turned out to be an engineering issue regarding the design of the most common pump, the Indian Mark II.

Without direct access to engineering talent, the team spent considerable time conducting basic research into engineering challenges and potential solutions. This actually came at the expense of spending more time exploring ways to expand other potential sources of income for returning refugees, which was also desperately needed given the significant and widespread poverty.

The team discovered after a few days they were able to get much better insights by interviewing the village men and women separately (with interviewers of the same gender). There were significant gender disparities, as the men did little more than drink every day, but expected water when they came home and would subject their wives to violent outbursts if it was not ready for them. The wives, meanwhile, were enterprising as the main income earners for the family through handicrafts, services, and even beer brewing, while providing food and water for their families, often walking miles both ways to do so.

BOTFL partners not only with international humanitarian organizations, local NGOs, but also multi-national organizations such as General Electric.  In a series of discussion with leaders GE executives in East Africa, inadequate well design was broached.  GE’s large infrastructure business unit expressed some interest in the unmet need.  This discussion led the team to explore ways to find an engineering solution for wells that would work both for Ugandan villagers and General Electric.  The challenge would be to design, perhaps using new materials, a durable pump that would work under the harsh conditions of Northern Uganda, thereby relieving the strain for women who walked long distances to obtain clean water, while also being an economically profitable business opportunity for G’s infrastructure business.

The impact of business. During this project, the team was aware they may be able to bring large-scale business partners (e.g., GE) into the discussion, but they also saw that business-minded individuals such as individuals who make a little money by brewing beer or selling rope had a significant impact on their families and communities.  The BOTFL challenge then became how to create the conditions for such small village entrepreneurs to flourish and create more opportunities for their neighbors and for themselves to earn livelihoods for their neighbors.

The team developed the business case for R&D investment in such durable pumps, based on the clear unmet need left by existing suboptimal equipment such as the Indian Mark II pumps.  The potential market for durable pumps could have customers as NGOs, aid organizations, and even national governments who desperately needed the improved infrastructure solution to improve clear water access and sanitation.  However, an NGO with extensive local ties would be needed to assess the true market potential and help commercialize the technology.

Early in the BOTFL class, Professor Viva Bartkus asked her students to reflect on what success on BOTFL business and peace-related projects may mean.  When one student suggested all of the hard work on building businesses and peace initiatives in post-conflict countries would be worthwhile if BOTFL teams changed the life of just one person, Professor Bartkus disagreed.  She challenged each student to think bigger and not to settle for small impact when they could do more.

General Electric executives from R&D and from the infrastructure business units reviewed the business case for investment in water infrastructure.  However, before this process of business opportunity evaluation could continue, the partner international organization determined that collaboration with GE would conflict with its long standing faith-based mission.

This process taught BOTFL just how difficult it will be to find ways for cross-sector engagement among humanitarian organizations and multi-national corporations.  Even with senior executives from both organizations who showed good will toward each other, and even with a project with identifiable significant common ground – as NGOs/local governments need an improved water pump technology and the GE infrastructure business unit could see a viable business opportunity – in this particular case, important internal constraints such as mission and trust proved insurmountable.