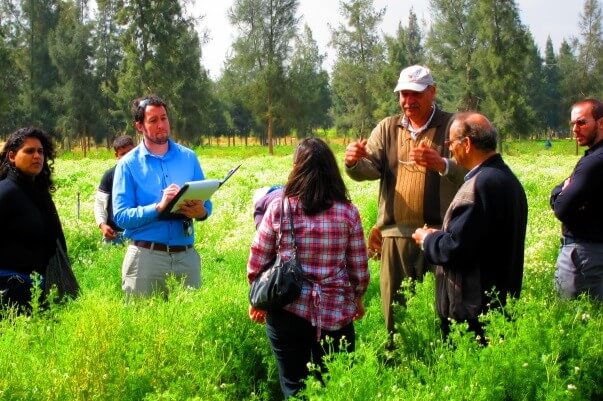 In late 2010 and early 2011, the Arab Spring swept through the Middle East and Northern Africa ousting long entrenched governments from power. Among the most notable of these revolutions was the overthrow of Egypt’s President Hosni Mubarak. Driven by soaring unemployment and aided by new technology such as social media, Egypt’s youth cried out for new leadership and after 18 days of protesting, Mubarak’s 30 year regime came to an end. High unemployment, particularly among men under the age of 30 continues to plague Egypt while a rapidly growing population is facing the challenges of inhabiting a small part of a vast country. With a population of 90 million that is expected to double by 2025 and unemployment estimated between 25-75% among men under 30, Egypt was in dire need of new jobs.

The faith-based international humanitarian organization that was BOTFL’s partner has worked in Egypt for decades on social, educational, and health programs.  The original question for the BOTFL team was how to engage SMEs (Small and Medium Enterprises) to help reduce unemployment in the youth sector while forming partnerships with large corporate enterprises. Upon arriving in country, the problem shifted more specifically to helping the NGO target a USAID grant aimed at developing employment opportunities within the agricultural sector.

The BOTFL team met with a wide range of business, community and political leaders through arrangements with our NGO hosts. These groups included several local employment action programs in Cairo, business association heads, agricultural co-ops, multinational corporations, and the chief economic advisor for the Muslim Brotherhood. Part of the team also traveled to Assyut, an agricultural center in Upper Egypt to meet with local business owners, and government officials. The wide range of meetings gave the team a broader understanding of general business conditions within Egypt as well as a firsthand look at some of the prime opportunities within the agricultural sector.

One of Egypt’s greatest challenges is that nearly all of its population and all of its agriculture lies in a thin strip of land nearly 1,000 miles long along the Nile River. From the train, the contrast was striking as there is a clear view of lush green fields that suddenly stop and give way to endless desert. With long distances to travel from southern fields to the main population centers of Alexandria and Cairo in the north and poor infrastructure to support such a trip, many farmers travelled long distances to sell their fresh produce despite very high spoilage rates. In Assyut, the team couldn’t find even small scale food processing plants for canning or preserving vegetables. Through meetings facilitated by both our international NGO partner and local NGOs, the team learned that nearly all of the processing for food products takes place in Cairo or Alexandria in the far northern part of the country. Moreover, there is very little technical support available for food processing elsewhere. Replacement parts and technicians often have to come from Cairo, which can lead to shut downs in production lasting from days to weeks.


What was our recommendation?

As a consequence, the team focused in on tomato canning as a potential business venture. Tomatoes are critical to Egyptian cuisine, are exported to the lucrative European market, and suffer a high spoilage during transport of up to 30% loss.

The team put together a proposal for the USAID grant to foster vegetable processing close to the fields, to reduce spoilage loss and provide employment opportunities in Upper Egypt. The team recommended facilitating the setup of a co-ops consisting of basic processing operations in areas close to key production zones, with the initial pilot focused on tomatoes. These nodes could be as simple as 5-6 people working in someone’s house to chop and can tomatoes close to the fields. The canned produce would then be collected and transported to a central location for consolidation before being distributed in the major population centers. This would help to rebalance the agricultural value chain geographically into the agricultural areas and out of Cairo.

The local processing nodes required minimal equipment and infrastructure to start. They would allow small groups already familiar with each other to work together as part of a larger collective. Local groups of women could run their own nodes in homes with friends and neighbors allowing them to both work and adhere to cultural norms that would otherwise restrict travel and employment outside the home.

Although the recommendation was well received by our in country partners, the USAID grant was ultimately not awarded to any organization. The election of the Muslim Brotherhood shortly after the team’s departure transformed the political landscape again. In the following years, Egypt has suffered political instability and conflict, the removal of the elected Muslim Brotherhood national government in
2013, the return of power to the military, followed by additional violent protests, military repression, and the increasing influence of ISIS. The international NGO continues to operate in Egypt as it has since 1956 – quietly focused on advocating for the rights of and creating opportunities for refugees, women, and other marginalized groups.