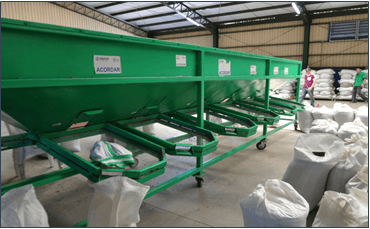 "I would say one of the biggest lessons that I learned personally was better interpersonal skills. My experience in Frontlines taught me that patience, gratitude, understanding, and engagement are all key factors working with people in any situation. And I really do mean any situation – from being patient when looking to gain a full understanding of why people have certain opinions about complex issues or problems in a meeting at work to being asked to donate an extra dollar towards a charity at the checkout line and feeling so grateful for the opportunities I have had in my life that allow me to do that without thinking twice."

Since declaring its independence in 1838, Nicaragua has witnessed a history of governmental turmoil, foreign intervention, civil war, poverty, and natural disasters. Coffee provided a source of economic growth into the twentieth century, funding infrastructural development. Diversification increased after World War II, with elite domestic interests dominating entire industries. Following the Sandinista Revolution, the country adopted policies of wealth redistribution, which combined with Cold War politics, served to stifle foreign investment. Natural disasters compounded economic challenges. With the reelection of the Sandinista Daniel Ortega, governmental policies again focused on redistribution.  Foreign investment dried up, particularly after the moratorium on repayment foreign loans. At the time of the project, the Nicaraguan economy was the second-poorest in the Western hemisphere behind Haiti.

A development organization engaged the BOTFL team to explore ways to improve the impact of its programs with partner agricultural cooperatives in order to better achieve its objectives of reduction of farmer poverty levels. Despite many years and multiple USAID grants, its projects focusing on fruits, vegetables and staples, the overall economic state of the farmers had seen little, if any, improvement. The development organization requested the BOTFL team work with six to eight of partner cooperatives to conduct an evaluation of their programs with the aim of uncovering hindrances to development.

The team conducted more than fifty interviews, covering seven regions in Nicaragua and working with multiple cooperatives. They also spoke with market managers, farmers, NGOs, and financial institutions across the country to gain a variety of perspectives.  Using the data they collected during these interviews, the team was able to map value chains for multiple products, especially beans, cocoa, pepper, and various vegetables. Combining this with market research and financial cost and revenue data obtained from the farmers and the cooperatives, they were able to provide insight into the domestic and regional market for these key products. In addition, they evaluated the systemic social factors underpinning and facilitating the current processes.

The first key recognition was the lack of competitive advantage for key products, especially beans, where farmers were actually losing money with every harvest. Despite heavy investments and gradual improvements in yield over time, the climate and soil conditions, combined with the production costs in Nicaragua put the local farmers at a disadvantage when compared with imports from other regional producers. Further, this competitive disadvantage would probably not be overcome through standard improvements in farming techniques. Indeed, these programs had actually created a dependency upon the support being provided, as farmers came to expect financial assistance of the cooperatives, which in turn could only continue their operations with the financial support of the development organization, which was supporting the farmers’ interests in beans, a crop which would never be sufficiently profitable.

Relatedly, the team found the investments did not match community needs. For example, the team discovered processing equipment for pepper and cocoa provided to the cooperatives as part of the USAID program went largely unused due to the lack of a competitive market opportunity for the farmers.

Finally, the team recognized mismanagement of the cooperatives dramatically undercut their impact. In the most egregious example, a teammate who was also a forensic accountant reviewed one coop’s financial accounts, upon which time, he discovered embezzlement of more than $40,000.

Based on their findings, the team recommended training for the development organization’s staff regarding business principles, invest business cases, value chains for the local agricultural products – all combined to build capabilities to better identify opportunities for growth and development in light of the current and emerging market conditions. During course of multiple discussions with staff from the partner organization, the question had shifted away from how bean production could be increased to how farmers’ overall livelihoods could be improved.

They also recommended further training in and exploration of cross-sector engagements with the private sector to broaden the opportunities for sustainable growth, so that ultimately the organization could establish sustainable long-term ventures allowing cooperatives and farmers to “graduate” from their assistance programs by becoming self-sustaining.

The team’s study served as the cornerstone of a training curriculum developed by Notre Dame and supplied to the development organization for future use. In addition, three training sessions were conducted, two in regional offices and one at the headquarters. The mismanagement was also reported and handled appropriately by the appropriate parties.