Cambodia - New framework for nutrition programming based on education & behavior 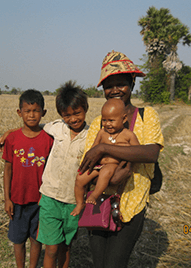 Thanks to tremendous effort of international and local non-governmental organizations, malnutrition in Cambodia has steadily decreased from the high rates experienced during the 1970’s genocide.  However, this improvement began to level off in 2005.  Unclear as to what was the driver of this change, a local NGO focused on health in Cambodia asked the BOTFL team to investigate further and make recommendations to improving its nutrition-focused programs.

Prior to traveling to Cambodia the BOTFL team developed a hypothesis that locals opted for rice simply because it is cheap and accessible. As a consequence, their initial theory was to add nutritional value to MSG, which was a common additive to meals.  However once there the team quickly learned that people have a strong cultural tie to rice because it is a traditional food which helped millions of people survive the genocide.  Even today, when rice is paired with fish or vegetables, BOTFL teammates observed that these served as little more than flavoring and were often left uneaten.

Moreover, people living in rural villages may have to walk an hour just to get to a market.  This means that even if they want to eat healthier food, they have to spend two hours of their day getting it, rather than working at their job which pays hourly wages.  Therefore many individuals opt to feed their family less healthy, but more readily accessible prepackaged food.  Awareness of nutritional needs and access to healthy foods are still major challenges for people in rural villages.

As part of their time in country, the BOTFL team participated in the NGO’s courses which taught women to cook nutritious food on a gas stove.  They observed that while the omelets made over a gas stove in class were tasty, when participants tried to cook on their fire stoves at home, the omelets burned quickly.  Afterwards, women would not attempt to cook the healthier meals from class again.  The team also tackled questions of how to realign the financial incentives for families to eat healthier.

The BOTFL team made two key recommendations to help the local NGO run their nutrition education efforts more effectively.  The first was to segment their audience of women into different segments based on either lack of knowledge of healthy eating and lack of ability to cook nutritious foods.  Simple surveys of local communities would enable the NGO to tailor their training courses much more to the underlying need.  The second recommendation was that NGO teach cooking with materials women have access to in their own homes, such as wood stoves.  This way they are better able to put into practice what they learned during the training.

The priorities of the local NGO were in the process of changing during the BOTFL team’s work in country, of which they were only aware after their return.  The local NGO began to move away from nutrition programming to other issues of health, based on donor funding.