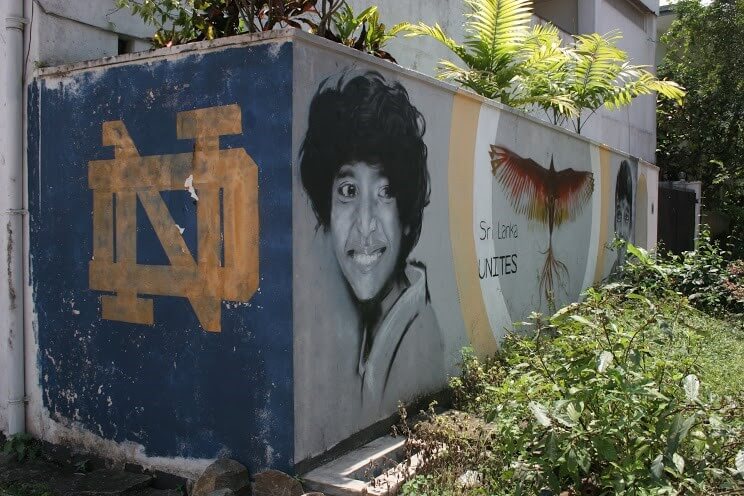 "From the moment we touched down in Sri Lanka, we all sought this proverbial conclusion - but were quickly introduced to failure.  Majority of our initial assumptions failed... we failed at cultural norms... at data collection... at team communication... But the beautiful thing about BOTFL is that it teaches you to find success in those very failures.  In an effort to find a sustainable revenue model for the youth of Sri Lanka Unites, we met with software CEOs, bank presidents, school principals, entrepreneurs... but I often left feeling no closer to an actual solution.  Looking back, I see that I was blinded to who our real clients were - the youth.  This epiphany wasn't had by reading a textbook, and certainly not be sitting in a lecture hall.  It was had while playing a 6:00 am cricket match against some local teens; not interested in "data", but in getting to intentionally learn about each other.  Understanding their skills, hopes, and aspirations re-framed our entire thought process - and introduced us to a whole new interpretation of what constituted 'success."

After decades of civil war, in May 2009, the Sri Lankan Military defeated the Liberation Tigers of Tamil Eelam..  The Tamil Tigers were fighting to create an independent state for their community in the north and east of the country. The decades of the civil war resulted in the deaths of perhaps 100,000 people, with over 300,000 internally displaced persons.

Founded in 2008 to promote youth reconciliation and peace building, Sri Lanka Unites’ (SLU) vision is: To unite the youth of all ethnic and religious groups across Sri Lanka in a movement that promotes reconciliation, creating a peaceful and prosperous nation for future generations. The organization runs four reconciliation centers across the country as its hubs not only for student-led reconciliation activities but also training in language skills, information technology, and business. The centers also hold sporting, theatre, recreational, and community development activities. Every year, SLU hosts its major flagship event: its Future Leaders Conference brings together young people from various ethnicities and religions to foster the group’s mission.

Since operations began, SLU has been dependent on financial donations largely from one-time contributors. Major donors include the British High Commission, Asia Foundation, and HSBC. Donor fatigue has become a major concern, as the memories of the end of the brutal war stretch further into the past. SLU asked BOTFL to help it develop investment alternatives to build sustainable businesses whose potential profits over time could grow large enough to cover its operating costs.

While in country, the BOTFL team met with business owners, corporate executives, government officials, and SLU students and benefactors to begin to understand which sectors of the economy have been fastest to recover from the civil war.  Moreover, the team conducted dozens of interviews in the quest to understand SLU’s impact on their communities, their core competencies, and opportunities to leverage these unique capabilities to support possible for-profit ventures. The team also collected data and consulted industry experts to explore potential  market gaps and in the business landscape.

The BOTFL team experienced moments of truth as the team travelled around the country visiting SLU’s reconciliation centers and assessing the core of their operations. The BOTFL discovered that SLU’s real strengths lie in the combination of its extensive connections with business and civic leaders across Sri Lankan society with its highly energized youth.

With data gathered from observations and interviews, the BOTFL team developed an analytical tool to assess the SLU’s organizational structure on 21 factors ranging from student engagement to center utilization. The team’s recommendations thus took a two-step approach.  First, the effort revealed operational areas in need of further investment prior to the potential launch of entrepreneurial business ventures.  Second, the BOTFL team focused potential business investments in the rapidly growing tourism industry, highlighting the need to trained hospitality staff, given the current shortage of such employees in Sri Lanka.

SLU challenged the team’s observations regarding operational improvement requirements.  Undaunted, the team continued to work on developing potential for-profit business models that would operate parallel to the existing organization. More specifically, the team recommended investment in several promising business opportunities in the Sri Lankan tourism industry. The BOTFL team recommends that SLU use recently acquired grant funding to start up a hospitality training business to serve the fast-growing premium hotel market. This entrepreneurial venture would provide soft skills and job-specific training to meet increased tourism demand for competent employees while decreasing training costs, turnover rates, and other expenses experienced by hotel employers. SLU leaders and staff have been enthusiastic about promising nature of such potential investments in these areas.