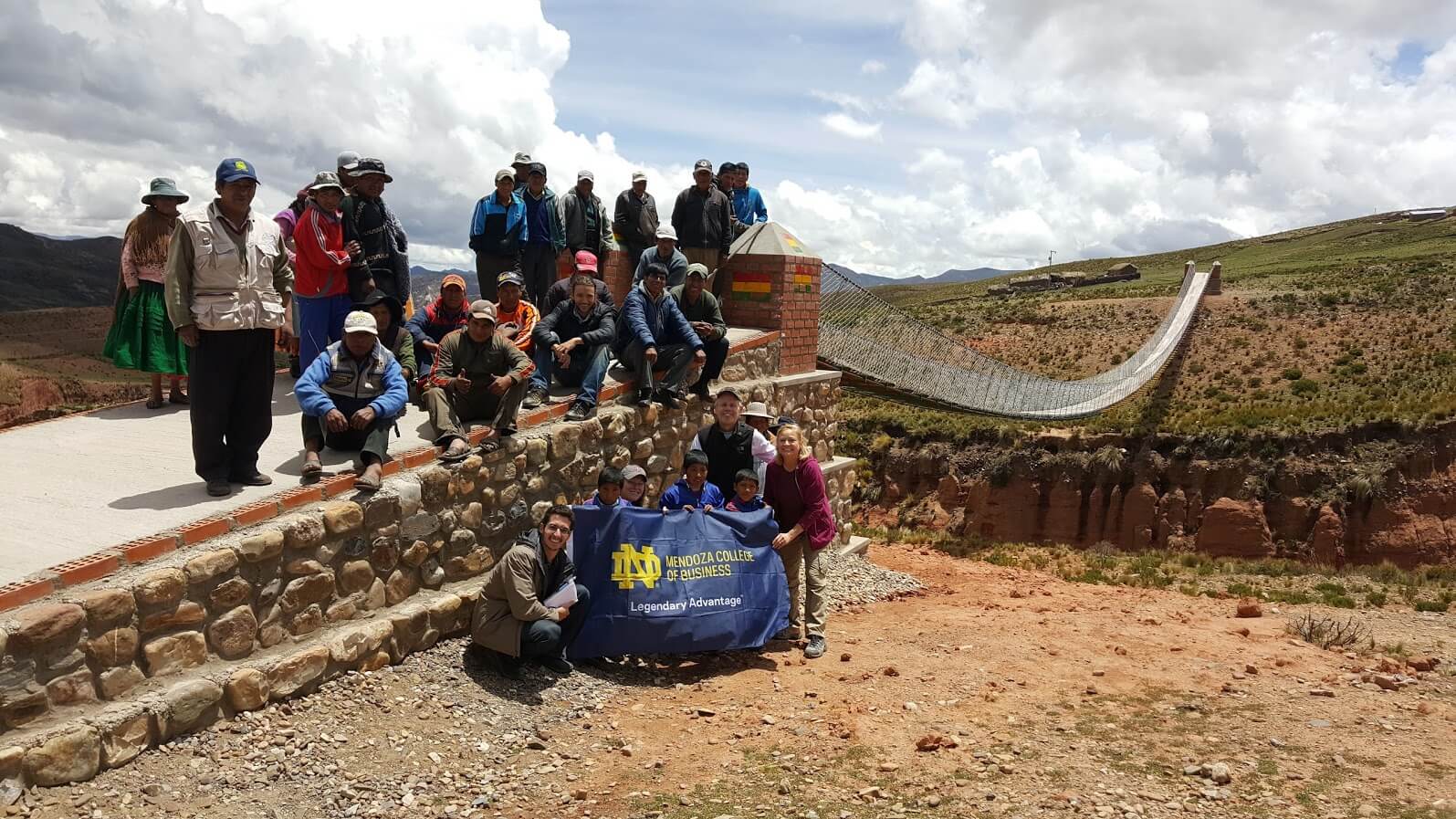 "BOTFL helped me better understand the impact of business in society. It showed me how important the dynamism of commerce can be to increase stability, prosperity, and well-being in conflict areas. BOTFL changed my perspective on how business should operate, opening my mind as I move forward in my life."

Since gaining its independence from Spain in 1825, Bolivia has fought multiple wars with its neighbors, losing half its territory and its entire coastline, and suffered over 200 coups. Social and racial segregation combined with rugged geography worsens community isolation and decreases growth. Despite the discovery of large oil and gas reserves, Bolivia’s economy depends on agriculture and remains one of the poorest in South America with high income inequality.

Bridges to Prosperity (B2P) engaged the BOTFL team to develop approaches for expanding its operations in Bolivia. Focused on relieving the effects of rural isolation by building bridges in rural communities, B2P experienced challenges to scaling up the number of bridges it built each year.

The team conducted extensive research on how rural communities isolated from transport links and major urban markets suffer from lower local economic and educational attainment.   They examined how the Bolivian national and municipal governments interact with international NGOs, the various sources of domestic and overseas funding, and the underlying needs of communities for bridges.

In the course of all of their travels the team visited 3 departments and 15 bridge sites, and was able to meet with over 20 organizations and conduct approximately 160 interviews. Meeting with such a wide variety of people allowed the team to develop a comprehensive picture of how B2P operated in Bolivia, its current impact, and where possible opportunities lay.

What was the Turning Point?

On a single day in the Chapare region, the BOTFL team visited two dramatically different bridges. The first bridge was about 15 minutes from the nearest road and connected a community to many fields on the other side of a permanently raging river. Every year, the bridge saved lives from potential river drownings. Furthermore, this community no longer lost crops while trying to cross the river.  However, the community was fairly small; the B2P bridge served fewer than a hundred people.

The second bridge was near the center of town and within sight of a larger vehicular bridge. It connected the town center and marketplace on one side of the river, to residential areas and a well-used soccer stadium on the other. While we originally questioned the need for the bridge, the community informed us that because there was so much traffic over the vehicular bridge, pedestrians were often hit while crossing it. Additionally, almost 100 kids used the bridge daily to get to school. The community was far wealthier than the first one in Chapare, their needs were not as great as in Chapare, but this bridge served many more people.

After seeing these two bridges, it became clear that B2P faces a more fundamental issue of strategic direction: should it prioritize bridges that serve a greater need, like in Chapare, or that serve the greater numbers of people, like in the town center?  B2P was building bridges in many different communities to serve dramatically different needs.  As a consequence, B2P was probably missing opportunities to improve donor fundraising, operational efficiencies and organizational effectiveness.

The team developed a series of key performance indicators to measure the impact of a bridge.  Such metrics for their bridges became an essential component of B2P communication with communities, government ministries, and large scale donors.

With this focus on key performance indicators, B2P could develop and then prioritize a more robust pipeline of bridge projects for multiple years. The B2P team would spend less time scrambling to find build sites every year, further enhancing their operations. Organizational responsibilities would follow priorities on the bridge pipeline. Ultimately, as a trusted advisor, the BOTFL team assisted senior B2P leaders to grapple with their fundamental strategy questions.