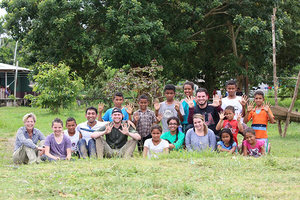 Although incredibly important to the overall health of our planet, the Amazon river basin continues to be threatened by illegal logging, poaching, natural resources extraction and pollution.  Over the last twenty years, FAS (Sustainable Amazonas Foundation) has led conservation efforts in the Amazon focusing on sustainable economic development of the Amazon’s abundant resources and its indigenous river communities. In groundbreaking initiatives, FAS has sought to balance the economic needs of the communities inhabiting the rainforest with the need for ecological conservation.

At the center of FAS efforts is the wild Pirarucu, a nine-foot-long, 400 lb, prehistoric, air breathing dinosaur fish which inhabits lakes in the deepest corners of the Amazonian rainforest. Communities rely heavily on fishing Pirarucu with half of their yearly income coming from the one week of fishing. Twenty years ago, the Pirarucu was nearly extinct due to overfishing. However, FAS taught communities to manage their commercial fishing operations, and hence,  the Pirarucu populations have come roaring back. The resurgence of the prized Pirarucu was expected to bring significant improvements in the livelihoods of indigenous communities, but sadly, it did not. The communities face an all too familiar situation - they do not capture a significant portion of the economic value of their fish. Instead middlemen and fish processors grab the majority of the profits. With few alternatives, communities are forced to accept low prices. If prices remain low, many communities will likely turn to illegal logging, mining and poaching in order to make ends meet.

Yet these communities call themselves “children of the forest.”  Acting in a capacity that we would understand as National Park Rangers, these communities are often the last line of defense against the pillaging of the Amazonian rainforest.   Building their economic livelihoods becomes incredibly important to protect the Amazon.  As a consequence, FAS asked our BOTFL team to advise them on how to build a vibrant and sustainable fisheries business around the Piracucu.

Prior to our departure to the Amazon, our team examined in great detail the Pirarucu supply chain, market dynamics and competitors. While in Brazil, our team traveled extensively along the Amazon to witness firsthand the challenges of getting a perishable good hundreds of miles by boat from its remote lakes to its end customers. The team spent over 80 hours traveling on boats, kayaks, canoes, speed boats, ships, and eventually found itself deep in the jungle. In between avoiding caiman, defending against massive Amazonian bug attacks, and getting beat in soccer by future professional soccer players (really just the average 9 year old Brazilian kids), our team interviewed dozens of communities and leaders across the two environmental reserves responsible for most of the Pirarucu production.

From our visits with river communities several things became clear; the communities felt they had little power, they were really proud of their role in protecting the Amazon, and they were eager to explore ways to bring more profit to their communities through their prized Pirarucu.

In many BOTFL projects, the team focuses its efforts in detailing the supply chain of various products, thereby uncovering potential opportunities. Graduate students bring their training in problem solving, research, and analysis to the problem at hand. However, on the first morning of our first full day in Brazil, our FAS partner’s colleagues presented a complete price and cost analysis for the entire Pirarucu supply chain.  All of the sudden our work became much more difficult.  We thought we were going to add value through identifying the central issues for the Amazon fishing industry, but it seemed that everyone already knew what those issues were. Furthermore, it seemed different organizations were already working on these issues. The team would have to push themselves much harder to prove useful to our partner.

The leader of FAS, Dr. Virgilio Viana, is a visionary who sits on multiple international environmental councils and even regularly meets with the Pope Francis on environmental stewardship issues. Recognizing these capabilities in FAS, our team challenged ourselves to think big. Really big. This allowed the team to move beyond simpler quick wins to put our efforts toward how FAS could build a Pirarucu empire.  FAS already had the most difficult strategic asset to acquire, namely privilege access to more than half of the entire supply of legal wild caught Pirarucu. With a heavy dose of community organization and moderate investments into three physical assets - boats to transport fish to the market in Manaus, ice making equipment, as a fish processing facility - FAS could build a business that earned millions of Reals per year.

FAS had started to invest in the team’s recommendations. Over time, such a Pirarucu transportation and processing business could provide a steady source of income for the fishing communities deep in the Amazon.  Furthermore, such a fisheries enterprise would also enable the communities and FAS in their frontline conservation efforts in the Amazon.  Thanks to the thorough analysis and recommendations of the BOTFL team, FAS is in the process of investing in additional boats and a potential fish processing facility in Manaus, Brazil.