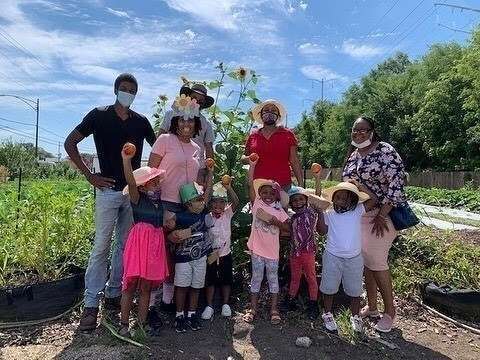 Greater Grand Crossing is a predominantly African-American community located eight miles south of Chicago’s downtown loop. Of the 30,000 residents, nearly 40% are living in poverty. The Greater Grand Crossing neighborhood faces many of the same issues that plague the other high poverty areas and Chicago’s Southside more broadly: high rates of unemployment and violent crime and a lack of access to high quality education, safe housing, updated infrastructure and affordable healthcare. The life expectancy of a Greater Grand Crossing resident is 11 years less than that of Chicagoans who live in the loop.

In many densely populated urban areas, especially those with high poverty rates, access to fresh healthy food is also scarce. In Greater Grand Crossing, the situation is no different -- 55% of households are at risk for food insecurity. Fortunately, the Gary Comer Youth Center (GCYC), in addition to offering after-school programming for young people in the community, has a 1-acre urban farm that produces more than 20,000 pounds of fresh fruits and vegetables every year. This farm serves the dual purpose of (1) developing educational opportunities and career pathways for young people and (2) providing access to fresh, healthy food to the community.

GCYC asked the Frontlines in America team to focus its work on the utilization of the urban farm. While the urban farm currently provides employment to staff, hands-on education and employment to student interns, and donations of fresh produce to the local community, Executive Director of the Comer Education Campus, Rhonda Hopps asked the FIA team for ideas on using the farm to create a social enterprise. If viable, this social enterprise could continue to provide employment opportunities for the Center youth, but also address the neighborhood’s unmet market needs and provide sustainable revenue to the Center in order to reduce the dependence on grant funding.

During the interterm week, with input from our GCYC partners and invaluable support from our advisors, we analyzed the value chain and performed a profitability analysis for each proposed product. We also visited another local non-profit urban farm, which had reached a level of financial sustainability in part by focusing on production. The information we gathered on this visit, combined with our analysis, made clear that the GCYC farm was not operationally capable of reaching the production necessary to become financially sustainable without sacrificing its education-oriented mission. Shifting to a production and sale model would be detrimental to the educational outcomes of youth and prevent GCYC from continuing its current level of healthy food donation to neighbors.

With that in mind, we considered alternatives. Armed with the knowledge that the farm products themselves would never be able to generate the profits that GCYC needed, the team dedicated itself to exploring additional possibilities.

We developed a matrix-based method to measure various crops across the key dimensions important to GCYC’s mission. Using this approach, we built scenarios to optimize for each dimension, as well as a blended scenario that appears optimal across all of these dimensions. In addition, we began to uncover ways that GCYC could better leverage the farm to tell its story and harness the wealth of expertise among its team to generate new sources of revenue.

Ultimately, we recommended that GCYC utilize the farm as a marketing tool and classroom rather than a primary source of revenue, and work to systematize potential new sources of revenue that require low effort but have high financial returns. Our three recommendations were: