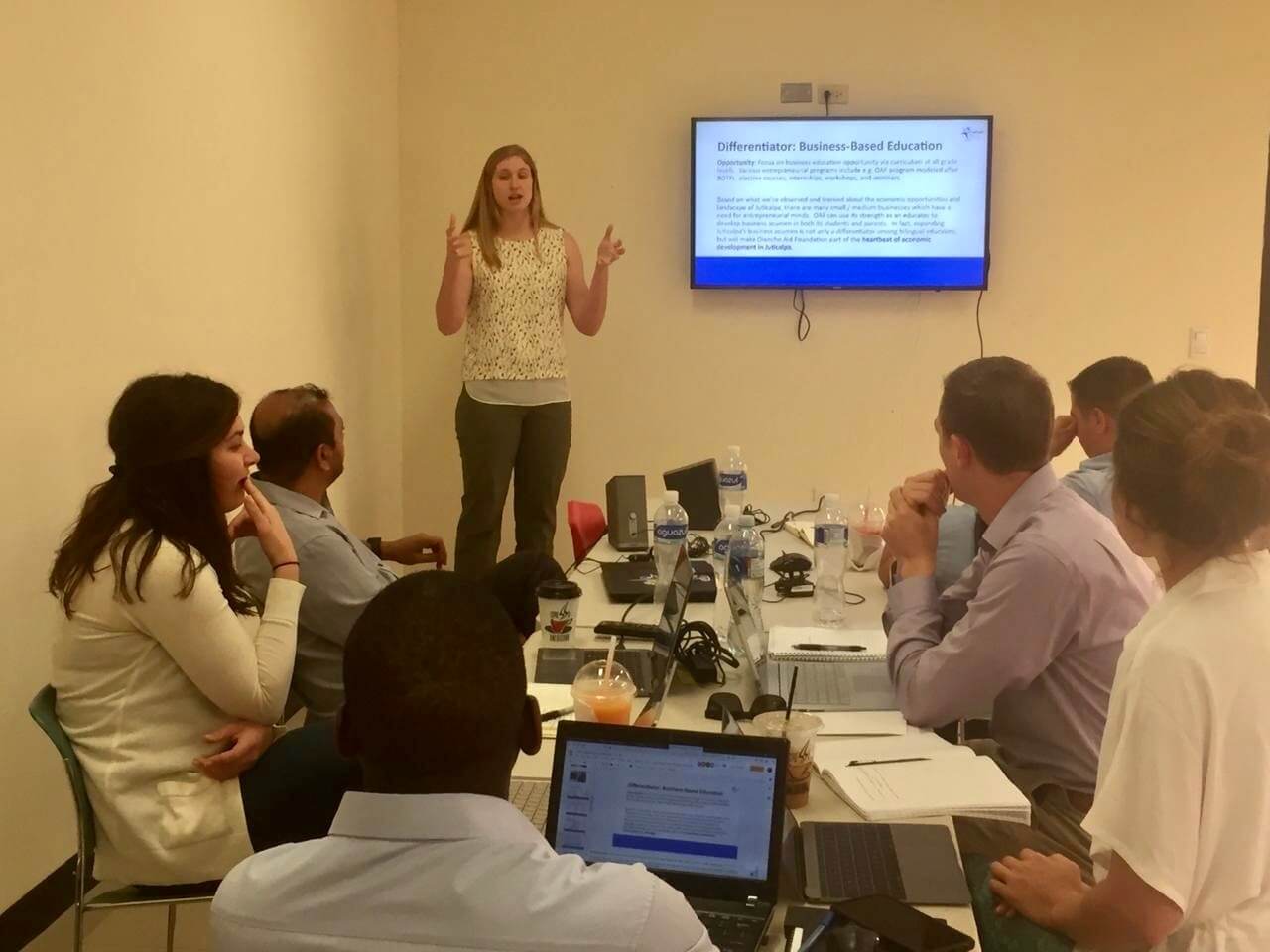 Honduras faces challenges of migration, economic inequality, poverty, and violence despite having the second highest growth rate in Latin America (second to Panama). Covid-19 and the Hurricanes of 2020 severely damaged much of the country and are estimated to have encrusted the poverty level from 60 to 80 percent of the population.  The informal economy encompasses roughly 80 percent of the workforce and represents 30 percent of GDP. The Department of Olancho is a rural and in some ways isolated region of the country. Most organizations and businesses operate independently without much external consultation. This avoidance of collaboration among businesses, resource and opportunity constraints have severely limited economic development in the region.

The region of Olancho has certain competitive advantages including low-cost diligent labor, fertile agricultural land, and transportation to Trujillo on the coast for exports. However, the entire Olancho region also faces critical gaps and challenges in further developing an economic engine including threats from narco-traffickers, the breakdown of families due to migration, and transportation, infrastructure and communication challenges.

The traditional economic activities in Olancho are cattle keeping, farming and forestry. Recent years have seen the development of small businesses and an increased desire for bilingual education as it is perceived to create more opportunities for the younger generation. There is also a lack of collaboration among the different stakeholders in Olancho who operate in silos. With the development of small businesses, there are many parallel programs in Juticalpa working to promote small business education, yet there is no organization that works to convene these efforts and share resources among the community.

The Olancho region also sees large amounts of annual emigration from the department, to both inside and outside of Honduras. We estimate  that between four and six thousand people leave Olancho annually for reasons related to economic hardship. This is based on a combination of immigration reports, census numbers, and Honduran Department breakdowns. The emigration for the region stifles economic growth and results in ‘brain drain’ from the region. Furthermore, this drain of financial literacy has hurt businesses, crippled competition, and created a dependency on alternative sources of income such as remittances for daily survival. As a result, economic development is stifled as citizens fail to create job opportunities for themselves or others.

With nearly 30 years of experience providing special needs and bilingual education, the Olancho Aid Foundation (OAF) has built an incredible amount of goodwill within the Olancho community. Recognizing their unique position in the community and the ability to impact many through educational programs, relationships and clean water projects, OAF is seeking to leverage its capabilities in the hopes of spurring more financially sustainable economic activity in the Olancho region.

OAF is looking to discern where new opportunities to grow and shape industries in the Olancho region could help drive employment and economic growth. After divesting bi-lingual school operations to the Diocese of Juticalpa, OAF is looking to develop long term strategies to remain distinctive in the education space. With these two core considerations in mind, the team set out to understand the core reasons why small businesses struggle in the areas and why many migrate to larger cities and other countries.

The team completed many Zoom interviews with current and former residents of the area, OAF staff, economic development professionals, and more to uncover information regarding the local economy and business environment. The research gave us critical insights into the socioeconomic structure of the Olancho region and Honduras as a whole. Furthermore, it allowed us to tailor our recommendations around the specific and urgent needs of both the foundation and the greater Olancho region.

Analysis revealed a few thousand residents of the area migrated from the area annually in search of greater economic opportunities. Additionally, we saw that there was a lack of employment opportunities in the region for special needs children and adults. Our team began to craft a solution to address the vocational needs of those in the Olancho region.

Throughout the process, a common theme that was continually reiterated by various parties was the lack of business acumen in the region. Many organizations worked in silos, failing to create the collaborative business community necessary for growth. Furthermore, those that worked in business failed to understand relevant business concepts that allowed them to maintain a continually viable business. For example, we heard how even those with assets failed to fully leverage their assets for one reason or another. The prevalence of this kind of business behavior was seen in the example of an Olanchano who sold a pregnant cow, rather than waiting for the cow to give birth, effectively doubling their asset. This decision was a microcosm of two realities, both of which we looked to curb in the region. First, the decision could have been made because of a lack of business acumen which resulted in an inopportune business decision where the farmer failed to fully leverage their asset. Second, the decision could have been driven by a lack of financial stability which drove a decision that the owner might have otherwise not made. In any event, the example of the sale demonstrated the necessity of basic business development in the region.

We also found that there was not a need for a certificate or trade school in the region. Based on our interviews, we found that students who received a certification wouldn’t be able to demand higher wages. They would be trained in apprenticeships and business was built on personal relationships. We saw that OAF shouldn’t focus on issuing trade certifications, but rather developing business skills.

We saw the need for basic business development as a new area for OAF to expand in the region. The foundation already had experience and connection in the education sphere, plus a growing business academy could allow the organization to do more as a hands-off convener that fostered growth.

Our insights, belief, and research have led us to believe that OAF can foster economic development in the region by forming an Institute for Business and Entrepreneurship and developing the AGAPE farm project.  OAF can leverage its abilities to facilitate more financially sustainable informal business activity in Olancho, creating broader economic independence and potential transitions to the formal economy. These two core recommendations will help OAF embrace a strategy in line with the organization's mission which allows Olanchanos to stay home and foster business.

The OAF Institute for Business and Entrepreneurship would be a certificate program that would take place over a year or less. The curriculum should be comprehensive and complimentary. We also laid out skills that we thought that informal business operators in Olancho could benefit from learning and building courses around those skills. We imagine that students take one course a quarter with seminars featuring guest speakers and experts in different subject matters. We also want the Institute to build a network of students so that a community of business owners and entrepreneurs is fostered in the department.