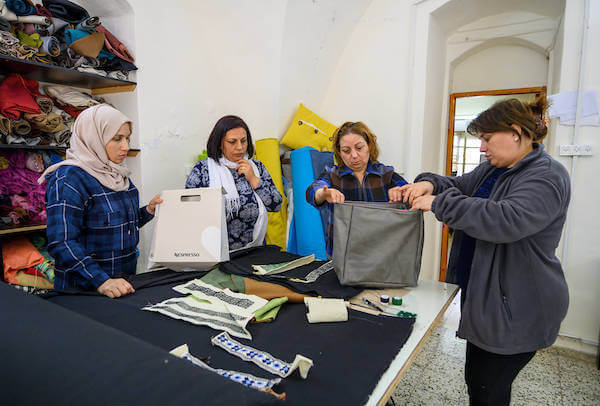 The Israeli-Palestinian conflict has created an extremely hostile environment for business and employment in the region. Palestinian women have been particularly impacted by soaring unemployment and limited opportunity as the result of living in austere conditions under an authoritarian state. Road closures, checkpoints, and armed conflict are just some of the daily occurrences that have become normal in the region. In light of these hardships, Child's Cup Full (CCF) has emerged with a mission of employing disadvantaged Muslim and Christian women in the West Bank and creating lasting economic growth. This organization has high hopes of reversing the current roadmap for their employees and contributing to the region's economic growth.

The founder of CCF, Dr. Janette Habashi, created two brands to support the missions of the organization. The first brand is Darzah, which makes custom tatreez handbags and shoes, and home accessories. The second is Zeki Learning, which makes children's educational toys in English, Arabic, and Spanish. Both brands have focused their sales efforts in the US market, focusing on educational institutions and major retailers. Both are also Fair Trade certified, handmade, and many consists of recycled or upcycled materials. They have a mission-driven story that identifies with US consumers and a motivated, adaptive, and resilient workforce.

Palestine's economy struggles to grow, largely due to the ongoing conflict with Israel. As a whole, the country's unemployment rate for skilled women is a staggering 49%. Unemployment exists in Palestine from a lack of opportunity; women in Palestine want to work. Child's Cup Full was founded as a testament to this desire for work when Dr. Habashi was approached by a group of Palestinian women who asked her to provide work for them.

To continue providing work and growing employment opportunities, CCF needs to increase its total sales and overall profitability. CCF has continued its normal production through the COVID pandemic, managing to keep its sales revenue numbers near normal. Still, inventory continues to grow as the number of total sales has fallen due to the COVID-19 pandemic, partially due to some of the sales venues CCF traditionally uses to move products having closed. Moving the inventory on hand to grow CCF’s impact in Palestine will be the main objective for securing CCF’s future.

Before meeting with Dr. Habashi, our team's primary focus was building a financial analysis of CCF's total operations. We sought to grow overall profitability to determine what would be required to add additional staff in Palestine. We were also operating under a view that cutting costs in Palestine, providing we were not cutting employees, was an acceptable outcome. Our initial hypothesis revolved around the profit CCF would require to hire an additional part-time worker along with finding the funds to hire that worker. During our research, we determined that an overall understanding of CCF’s inventory was our biggest unknown and something which CCF was not closely tracking as they worked diligently to keep overhead costs in the United States down. We found a tremendous opportunity for CCF in its existing inventory and began to work through ways to increase overall sales and begin to move that inventory.

During the week we spent with Dr. Habashi, we analyzed the existing inventory and created a document of all inventory on hand. We also discussed sales and marketing strategies, how CCF has been successful in the past, and opportunities for greater success. The meetings we had with Dr. Habashi, her marketing team, CCF’s interns, and a few operations similar to CCF helped us gain a complete picture of CCF and its overall operations. We used this information to do a more comprehensive analysis of CCF and begin to assess the most significant value we could provide for growing their impact in Palestine.

After analyzing the cost structure of different product categories, discounts, and current inventory in the US, the team's priority changed to increasing CCF’s and managing their inventory more efficiently. Our reason for doing this was based on impact; cutting costs in Palestine would reduce CCF’s impact, an undesirable outcome.

Additionally, the team found that CCF has a strong network of interns who strongly believe in the CCF's mission and work for the organization without any compensation in return. This realization allowed us to start thinking about the CCF team from a higher level and helped us realize there were some gaps in the organizational structure. CCF needed skilled business professionals to manage the operations efficiently and effectively utilize their intern workforce. Having qualified business professionals on its side will help CCF increase its efficiency and strategic decision-making.

The team made recommendations with two objectives: first, we see the need for CCF to increase its sales so that it can increase its production. Secondly, CCF needs to increase efficiency as well as its organizational skill set so they can manage their operations and execute various strategic decisions efficiently.

The team broke its sales increase recommendation into two distinct areas of focus, marketing and sales. To improve marketing strategy the team recommended developing targeted advertising campaigns to interact with a smaller high-interest customer base, a change from its current strategy of advertising to a larger indifferent user base. Additionally, the team recommended design changes in the websites of CCF, Darzah, and Zeki to communicate its impact and social cause as well as its discounts and domestic free shipping policy. We made these recommendations with the objective of motivating prospective buyers to shop with these brands. Finally, the team recommended personalizing the customer experience with CCF and its brands by sharing the stories about how and why the products are made and how a customer purchase makes an impact in Palestine. The second recommendation to increase sales centered around utilizing CCF's volunteer workforce as a salesforce, compensating them with gift cards to make their own CCF purchases. This new brand ambassador program will provide a low cost way of accelerating sales growth, as many of the prospective ambassadors already represent the product in some way every day.

In order to increase organizational efficiency the team also made two recommendations. The first recommendation was to create an inventory management system that would track inventory on hand in both the United States and Palestine. This will allow CCF to analyze current inventory levels and determine what products are in high demand. From there CCF can forecast the products that need to be produced to maintain an optimal inventory level. The second recommendation was to create an advisory board of skilled business professionals that can advise the CCF on strategic and operations decisions. This will give CCF the skillset it needs to implement the other recommendations made by our 2021 Business on the Frontlines Team as well as previous and future BOTFL teams who will partner with CCF. Finally, we recommended hiring a business manager to focus on the operations of the business in the United States and assist Dr. Hibashi with day to day business decisions. All of the new and current positions were then placed into an organizational chart provided to Dr. Hibashi with the intent of reducing the work required from her to run daily operations, allowing her to focus on growing her organization.