Brazil - Building livelihoods in the Amazon through sustainable tourism 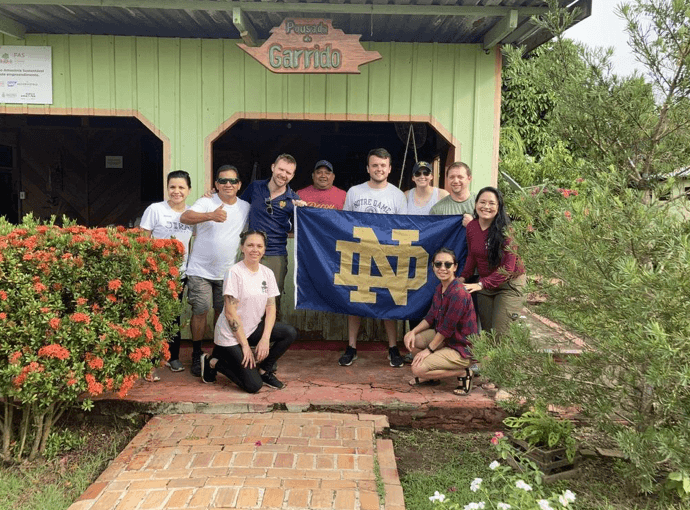 This year was the fifth year that Business on the Frontlines (BOTFL) worked with the Amazonas Sustainable Foundation (FAS). FAS is a Brazilian NGO, created as a partnership between the Government of the State of Amazonas and the Bradesco Bank. Their mission is “to promote the sustainable involvement, environmental conservation and improvement of the quality of life of community residents and users of protected areas in the State of Amazonas.”

This project's goal was to develop sustainable tourism practices that will play a crucial role in increasing the income per capita of those living in the river communities through employment opportunities and increased visibility of the food, art, and culture of the Amazon. Through continued education and increased support, FAS can improve the river community’s quality of life while staying true to their mission of environmental conservation.

Outside of the peak sports fishing months, the lodge owners of the Rio Nego and Uatumã reserves have the unique opportunity to generate revenue in the form of ecotourism. Some lodges currently operate near maximum occupancy during the sports fishing season, however that leaves approximately nine months of the year with underutilized revenue capabilities.

Our team noticed a lack of differentiated services between the lodges and identified that additional offerings would be necessary to create revenue drivers during the off-season. In addition to service offerings, the lodges needed a better way of marketing these off-season services and accommodations. Each lodge currently works independently with different third-party booking websites or local liaisons to secure new tourists.

The lodges have historically been successful in the sportfishing industry via word of mouth, so attracting a different clientele would be difficult without a change in approach.

Our initial research took a deep dive into understanding the tourism market in the State of Amazonas as well as analyzing the tourism landscape in the Rio Negro and Uatumã reserves. We partnered with FAS and local entrepreneurs to map out the tourist’s journey which allowed us to form a hypothesis. While in the field, our team went into the Amazon and met with local entrepreneurs, government representatives, and tourism business operators to better understand the value chain of the tourism industry as well as the feasibility in improving tourism in the reserves. We discovered the fundamental opportunities and challenges of ecotourism resided in the communities. This was accomplished through data collection and consulting industry experts to explore potential market gaps in the business landscape.

Initially, we thought that the target customer for the lodges should be international tourists. This was based on data that suggested international tourists spend more while in the Amazon and have a higher disposable income to afford these trips. However, we quickly realized that there are a number of logistical challenges that create significant barriers for international tourists to get to Manaus and the reserves. We also learned that there were language barriers that made it difficult to communicate with the lodge owners as well as most other native Brazilians we interacted with during our time in-country. These factors led us to shift our focus toward domestic travelers.

Our recommendation was broken into three stages. The first stage focused on development in the Rio Negro reserve, starting with the creation of an association for the lodge and restaurant owners in the reserve. This association will manage and guide the entrepreneurs through the following initiatives, with initial assistance from FAS. The association will lead the creation of a formal website and dedicated booking channel. This can be further integrated with the pre-existing Poranduba Agency and FAS websites. These websites can be improved by professional photography and videography to capture and showcase the beauty of each location. To accomplish these objectives, FAS and the association should partner with a marketing agency that has the expertise to optimize their digital platforms and increase traffic to the booking channel.

Stage 2 will follow the same roadmap as Stage 1 for the Uatumã reserve. This will begin with the establishment of another association to organize and lead the lodge and restaurant owners in this reserve. In addition to carrying out the same actions as Stage 1, Stage 2 involves the development and advertising of formal and ticketed events. The formal events can come in the form of wedding/anniversary packages while the ticketed events can be for experiences that are unique to each community, such as the turtle release held by the Mirante Uatumã lodge.

Finally, Stage 3 broadens the focus from domestic tourists to international tourists. This will require additional efforts to target potential customers in surrounding South American countries as well as the United States and European countries that have citizens that already visit the Amazon. To accommodate the needs of these tourists, we recommended the creation of an English and Spanish language class.