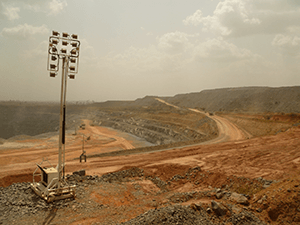 Ghana’s reasonably stable political system combined with lower levels of corruption has made it an attractive entry point for business investment in West Africa.  Given recent economic growth, even though much of the population, particularly in the arid North, remains desperately poor, Ghana has been reclassified as middle income.  As a result, many international humanitarian organizations working in Ghana stand to lose their funding as donors prioritize countries with perceived greater needs.  One local NGO asked BOTFL to examine new funding opportunities by exploring possible partnerships with multi-national corporations.  At the time, the local NGO had no previous experience in working with international companies.

Through meetings with Ghanaian, American, European and even Chinese business leaders, journalists, academics and government officials in Accra and in the provinces, the team learned just how much the agriculture and extractive industry sectors had been driving economic growth in Ghana.  As a consequence, the BOTFL team focused on possible collaborations between the local NGO and potential agricultural and mining companies.

Through the University of Notre Dame connections, the BOTFL team scheduled meetings with local mining executives focused on exploring the possibility of partnering with Newmont Mining, the largest gold miner in the world with operations in the US, Canada, Indonesia, Peru, Tajikistan, and Ghana.  Newmont was also prioritized based on both its 20 year commitment to corporate social responsibility initiatives around the world and the fact that it had been running the largest gold mine in Ghana since 2003.

The leader of the local NGO had never seen a mining operation and was understandably skeptical of a potential partnership, but was willing to visit and engage in high level discussions.   At first the conversations were a bit bumpy, as the two organizations spoke different languages, had different decision-making timelines and processes, and different partnership assessment criteria. It took the commitment from the top leadership to overcome barriers as they arose.  Goodwill and patience was needed on both sides, given this was a very new potential collaboration for both parties.

What the BOTFL team discovered through careful due diligence, interviewing, research, data gathering, and analysis was the despite Newmont’s best intentions in Ghana to conduct corporate social responsibility initiatives through the Newmont Foundation in Northern Ghana, the local NGO could conduct similar programs between 10 times to 300 times more cost effectively.  This means that for the same dollar of corporate social responsibility money invested, the local NGO could touch the lives of many more Ghanaians.

When the BOTFL team reflected on this finding, here is how we made sense of it.  Newmont's shareholders demand that Newmont focus on its core capabilities of geology and metallurgy. These professionals need not know the best way to conduct micro-finance or educational or healthcare programs in surrounding communities.  By contrast, the local NGO had dedicated 50+ years refining its capabilities in designing such programs and developing community relationships essential to administering them.

The BOTFL team made NGO leadership more aware of corporate sector engagement as a possible source of funding.  Although the large potential benefits in terms of touching more lives by combining the NGO’s relationships in Ghanaian communities to Newmont's investment in corporate social programs drove initial conversations exploring the common ground between the potential partners, these discussions ultimately stalled.  The NGO has initiated a broader internal strategic reviews process to determine how engaging in high level partnerships with multi-national corporations may be consistent with its mission and operations.