Guatemala - Cultivating and Commercializing Cacao for the Mayan Q'eqchi' People 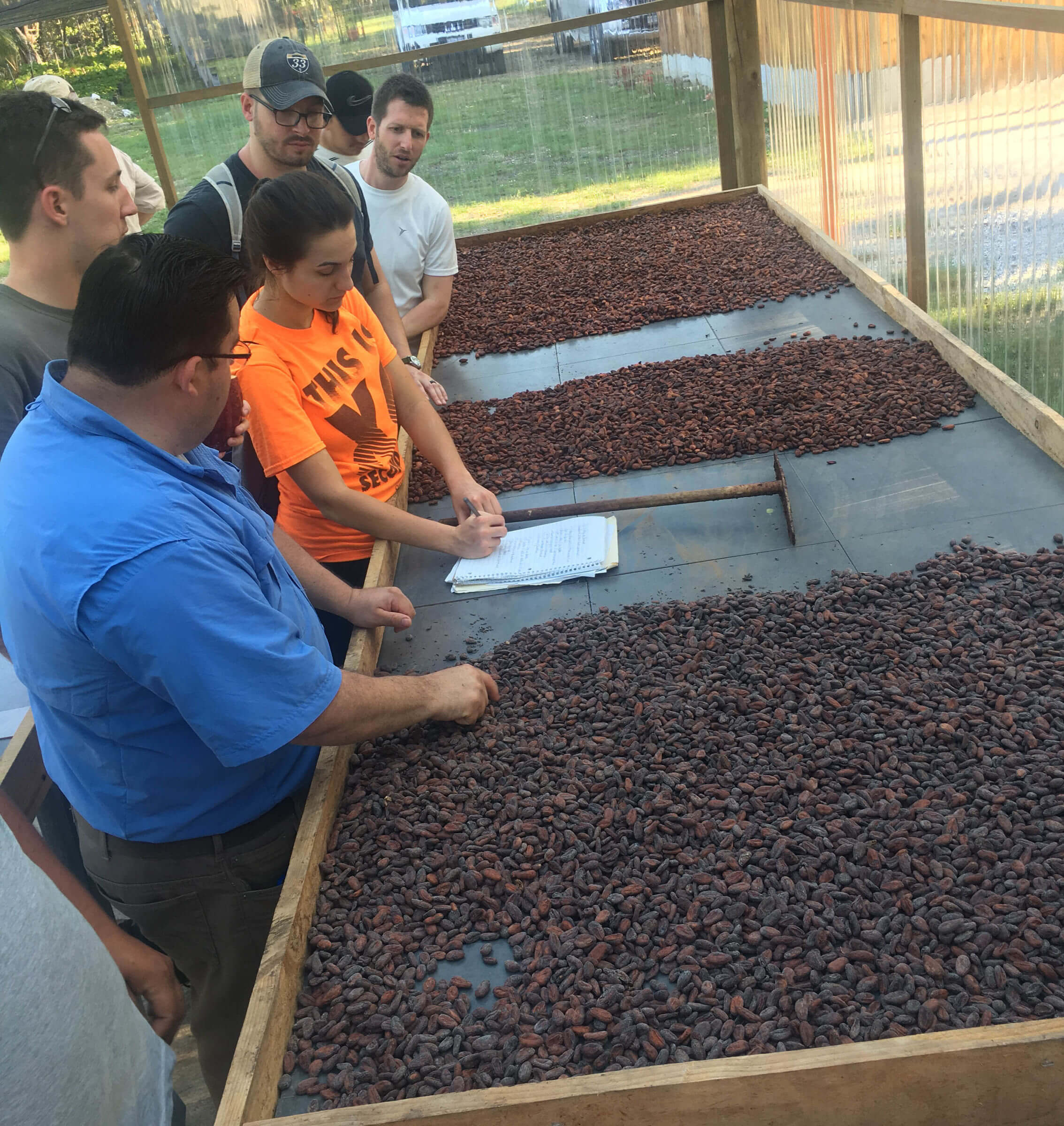 Representing Business on the Frontlines' long-term commitment to its partners, LDS Charities
and the indigenous communities it serves, this project built off the work of BOTFL X by
furthering the implementation of cacao production and commercialization in the Polochic region
of Guatemala. The Mayan Q’eqchi’ people are the predominate inhabitants of Polochic - a region
that is severely lacking in infrastructure, government services, and economic opportunities.
Indigenous communities suffered a disproportionate share of the violence during Guatemala’s
long history of conflict, leaving many families dispossessed of their traditional communal lands.
As a consequence, over 90% of the population currently lives in extreme poverty, with most
families living on less than $1 per day. Our project emphasized development in mountain
communities in Chulac, where the people are a mixture of subsistence and cash crop farmers.

In 2018, BOTFL X conducted research to identify potential long-term economic development
solutions and ultimately provided recommendations regarding the viability and sustainability of
cacao. Based on those recommendations, LDS Charities began a pilot program in September
2018 by purchasing 200 locally-grafted cacao trees and distributing those trees to approximately
15 families in Chulac. This pilot program was aimed at assessing both growing conditions for the
trees themselves, and the interest of community members. As members of BOTFL XI, our goal
was to conduct deeper research on cacao production and commercialization by developing ideas
that would set participants of the pilot program up for success, which we define as extending
LDS Charities’ mission of self-sufficiency at the individual and family level and building more
prosperous communities through improvements in economic livelihoods.

Leading up to our trip to Guatemala, we held numerous meetings with various stakeholders
within LDS Charities as well as with agricultural experts and current buyers of cacao in
Guatemala. Our aim was to figure out how best to implement and build upon BOTFL X’s cacao
recommendations.

We spent our first week in Guatemala out in the Polochic region seeing firsthand what the needs
of the Q’eqchi’ people were. We met with many families face-to-face and heard directly from
them about the steps they had taken to better their own lives, many of them having learned to
raise chickens and tilapia for sale within the local economy. We were unbelievably humbled to
have been invited to eat a hand-made, home-cooked lunch inside one of the family’s homes, a
privilege practically unheard of in the Q’eqchi’ culture when meeting strangers for the first time.
We visited several schools where we spoke with local students and were even honored as friends
of the LDS Church at a ceremony for their recent computer donation. We danced traditional
Mayan dances and had the chance to taste authentic Mayan cuisine, a truly unforgettable
experience as we felt welcomed into a community that had previously seemed so distant. Our last
few days in-country included visits to several buyers, processors, exporters, and even the
governmental agricultural ministry. Many of the contacts we made showed potential to serve as
the next steps in our project’s value chain.

Throughout our time in Guatemala, it became increasingly evident to us, as well as our partners,
that pieces of this project were coming together through divine intervention. When we were
served cacao at the school celebration, we were introduced to Maynor, a professor who also
owned a plantation with roughly 100 cacao trees and who could potentially serve as a viable
buyer option for the community members. As we were driving down a road in the Polochic
Valley several days later, we stumbled across APODIP, a co-op whom we had unsuccessfully
tried to reach in the time before traveling to Guatemala. We went into Guatemala with a plan in
mind, but the unexpected people and places that crossed paths with us ended up being the ones
that framed many of our ultimate recommendations. We truly felt that God was with us along the
journey.

Going into the country, our research indicated that the best solution for the Q’eqchi’ people
would be for them to organize themselves into a cooperative and collectively sell their harvests
to a common buyer. Through speaking and breaking bread with various community members,
we noted a high degree of individualism and jealousy, effectively rendering cooperation
impossible. As an example, one man began to achieve success by raising tilapia, only to have his
neighbors quit buying fish from him in an attempt to sabotage his newly acquired wealth. We
went into Guatemala with the typical business mindset of trying to attain profit maximization.
T he commercialization of cacao in these communities, however, was going to require working
with a different mindset. The Q’eqchi’ people vary greatly in terms of status, motivation, and
capability. Several of the people we met were unwilling or unable to care for new trees:
noticeably neglecting them or having planted them without any shade. Because of limited
literacy and numeracy skills, coordination and organization would prove to be difficult. Insights
such as these were critical to establishing a new set of objectives that would be appropriate for
this environment. Rather than building a centralized operation that maximizes profit and creates
economies of scale, this project would require a more nuanced implementation plan that
emphasized individual production.

Our recommendation focused on two primary activities: 1) the expansion of the pilot program
and 2) further education for the youth within the community.

1) Any individual residing in Chulac or the surrounding communities can independently
grow, maintain, and harvest cacao trees to be sold to any of several buyers. We
recommend utilizing the local economy, expanding the cacao project to other willing
families within the community, and providing current cacao growers with information on
selling options that are available to them.

2) LDS Charities should invest further in the education of the community and prepare the
youth who will be future leaders in the community. Specifically, we recommend a school
curriculum that addresses techniques for cacao cultivation as well as the financial benefits
of crop diversification.

Our BOTFL team introduced these ideas and our analyses with our LDS Charities partners in
Salt Lake City and Guatemala, which led to additional valuable insights and tactical strategies.
Our research and recommendations provided a clear starting point and framework for our partner
to move the pilot program forward and expand the project to even more families in the mountain
communities within the next several years. If this project is scaled the way we believe it can be,
within a decade, participating families can expect to be earning more than $2 per day, which is
above the international poverty line. This multi-year collaboration between Notre Dame and
LDS Charities has the potential to foster true and impactful long-term economic development for
the members of the Q’eqchi’ community.