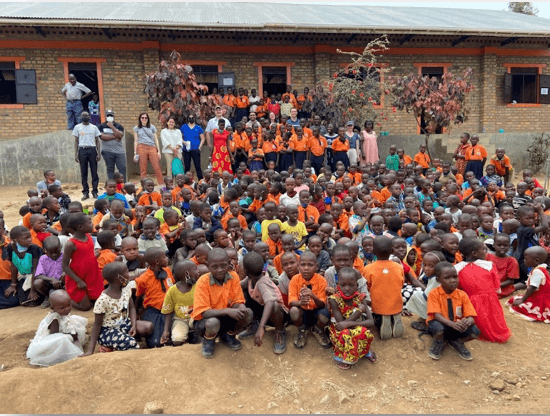 Located in East Africa, Uganda is home to roughly 48 million people, nearly half of which are below the age of 14. Despite being home to so many young people and having  one of the top-ten fastest growing populations in the world, children across the country still struggle to access proper education.

Our partner, Building Tomorrow, has now been building schools in rural areas of Uganda for more than 10 years. However, building schools is not their only area of expertise.  Through their Thriving Schools program, Building Tomorrow deploys members of their fellowship program into these rural communities to work with community leaders and school officials to boost enrollment and reduce drop-out rates.

During their two years in fellowship, fellows develop robust problem-solving skills and attain unique perspectives of the challenges faced by members of these rural communities. Fellows also possess an innovative and entrepreneurial spirit, regularly utilizing their skills from the field to start businesses or social enterprises to have a positive impact on their communities.

When a fellow or former fellow is successful in establishing their enterprise, the effects are felt, on average, by 660 beneficiaries throughout the community. With an established base of 300 current and former fellows, the opportunity for community impact is significant. Since beginning the fellowship program in 2016, Fellows have gone on to start businesses and social enterprises in areas that range from environmental sustainability to financial equity and inclusion, to  production of cement construction blocks.  Unfortunately, despite the success of many fellows, others lack the time or resources required to develop scalable, sustainable, and successful operations. Some fellows will forgo the idea of starting a business altogether as a result of the anticipated obstacles and barriers to entry.

Although the challenges faced may vary slightly by situation, there are several common themes that we noticed. Like many of us, time is a significant factor preventing them from launching their ventures. During their fellowship, each fellow is responsible for five schools throughout a region. As you can expect, takes a great deal of time and effort to support each of these schools, which leaves little time to pursue entrepreneurial visions. And once the fellowship concludes, fellows no longer have access to a stipend or provided housing, so they must either find jobs to support themselves or become Technical Advisors at Building Tomorrow. With either option, they are once again left with little time to pursue entrepreneurial ventures.

Time isn’t the only obstacle fellows need to overcome either. Many lack access to mentorship opportunities, sources of funding, and hands-on experiences; crucial resources to being successful and maximizing impact on local communities. As a result of these unmet needs of fellows, our scope of work was to design an innovation hub that would support the future career paths of Building Tomorrow fellow alumni.

Our research began well before we ever set foot in Uganda. During the initial weeks of our BOTFL adventure, BOTFL Team Uganda conducted extensive research on the entrepreneurial landscape across the country. As a team, we needed to develop a more robust understanding of how difficult it was to be an entrepreneur in Uganda, as well as the challenges entrepreneurs had to overcome with regard to opportunity and resources. Through our research, we came across several innovation hubs already established within the country. Each of these hubs had a slightly different structure and operating model, and thus we felt it would be beneficial to meet with them during our time in Uganda.

Another important aspect of our pre-travel research was our weekly partner calls with members of Building Tomorrow. These calls were incredibly valuable to use, especially during the opening weeks of our project. We used these calls as a platform to learn more about the work of our partner, the career path struggles of some former fellows, and sometimes, just Uganda as a whole. In addition to these weekly partner calls, our team set-up calls with specific alumni and members of these organization so that we could hear their stories and learn about their experience with Building Tomorrow. These interviews were a critical part of our initial research while also laying the groundwork for our relationship with the partner once we arrived in Uganda.

After seven weeks of research and problem solving, it was time for our two-week immersion in country. Upon arriving in Uganda, our initial focus was to meet with and interview as many fellows, former fellows, and innovation hubs possible. To be successful in establishing a hub that would meet the needs of current and former fellows, it was essential that we considered as many perspectives as possible, including those of hubs that already existed. Understanding the structure and operations of hubs already operating in Uganda would help us to lay the groundwork necessary to establishing a new hub specific to Building Tomorrow.

During our two weeks in Uganda, we had the privilege of meeting with five different innovation hubs and over 60 current and former fellows. But perhaps even more powerful were the conversations we had with members of the community that were beneficiaries of fellow success. Those interactions allowed us to empathize with the mission of Building Tomorrow and reminded us of why our work is so impactful. Whether speaking with a fellow, existing, hub, or community beneficiary, each of these discussions provided us unique perspective that was essential in crafting a final recommendation to Building Tomorrow.

Team Uganda experienced two separate turning points along it’s BOTFL journey, the first during our in-country experience. Towards the end of week one, we began applying the knowledge we had gained in country to our original hypothesis, and it led to a major change in direction. With this change in mindset, the team began to think about the possibility of creating an innovation ecosystem; instead of creating a hub specific to Building Tomorrow, partnership deals could be negotiated with existing hubs and Building Tomorrow could utilize the infrastructure that was already in place. In addition to the partnerships, Building Tomorrow could make minor changes to its own infrastructure, without establishing a hub, to better support its current and former fellows.

After returning to the states, our team continued to follow this train of thought and began to build out our final recommendation around the innovation ecosystem. It wasn’t until weeks later that we reached our second turning point. Once again, the team began to question its new hypothesis, and some members took on the role of a devil’s advocate. Despite nearing final recommendations, the team reassessed and pushed further on its ideas, landing on a recommendation that the entire team not only believed in, but also felt was best for Building Tomorrow.

Team Uganda had crafted a recommendation for Building Tomorrow that was a hybrid of its initial hypothesis and the hypothesis generated at turning point number one:

Recommendation #1: Enhance the impact of the alumni network by taking ownership of the Alumni Association that currently sits outside of Building Tomorrow’s organization. Create a platform on which current and former alumni can easily connect. Host and annual awards ceremony for current and former fellows.

Despite having an expansive base of 300 current and former fellows, the Building Tomorrow network currently sits as a primarily untapped resources for both current and former fellows. By implementing the above recommendations, Building Tomorrow can create an environment that fosters mentorship and a network that will be incredibly useful to fellows as they begin their careers after their fellowship.

Although we did not recommend Building Tomorrow partner with existing innovation hubs in the long-term, creating a transition program where fellows can enter partner hubs for two years has a variety of benefits. It provides Building Tomorrow to have a much quicker impact on the career path of fellows and will provide an insider’s perspective on the structure of existing hubs, which will only help them on their venture to open their own.

Though it may take longer to implement than recommendations one and two, the best way for Building Tomorrow to provide fellows with opportunities for success is to rent a space, hire the appropriate staff, develop a curriculum, and open its own hub. By utilizing our research and the feedback of participants in the TPP, Building Tomorrow will be able to craft a hub that provides fellows with all the resources that they are currently lacking, including mentorship, hands-on experience, and coaching.

Our recommendation broke the one-year BT (Building Tomorrow) Booster into three segments, each of which targeting a different need of fellow entrepreneurs. These three segments include two months of business basics and problem solving, two months of field experience with an established business or social enterprise, and eight months of coaching and incubation.